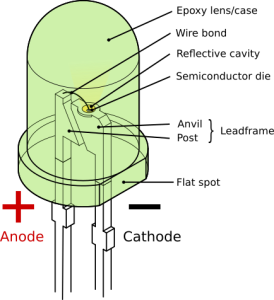 LED stand for Light Emitting Diode and as you might guess it is a p-n junction diode which emits light during the recombination of charge carriers in the semiconductor material inside the diode.Â LEDs emit light atÂ different wavelengthsÂ depending on the band gap in the silicon, in this way the LEDs achieve different colours.

You need to use a current limitingÂ resistor to limit your current to 15 mA if your supply voltage is greater than the LED forward voltage. You can calculate the resistance using the tool hereÂ or using the following formula:

It is pretty common to get 470 Ohm resistors with LEDs when you buy them from ebay sellers as that is a high enough resistance to ensure you are below 15 mA at 5 V for most LEDs.