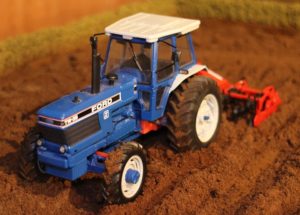 I grew up in rural Ireland where 60s/70s/80s tractors were a common sight on the roads, they’d probably served their time on the construction sites and were now retired to small farms. The unmistakable blue of the Ford tractors was everywhere from small three cylinder ford 3000s tipping around doing small farm duties to TWs with the accompanying plume of black smoke pulling ridiculous loads. The Ford TW35 is almost an icon tractor at this stage.

Back in 2014 the GRASSMEN release Two Legends and a Donkey and I was filled with nostalgic notions of my youth. Needless to say I immediately had to see what Ford TW35 model I could get for a build. I went with the universal hobbies model because I already had the Ford 7810 so I knew while it would be hard to convert at least the detail would be great.