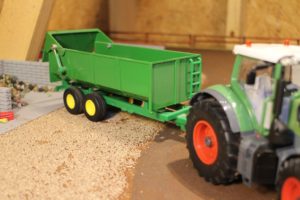 The Marston Grain Trailer was the first trailer I bought after I got the RC Massey 8680 working and it’s obvious why I wanted it, what better for an RC Tractor than a dump trailer. I was only interested in getting it to tip, I wasn’t worried about LED lights or anything like that.

The trailer has a diecast body with a plastic chassis which makes it difficult to lift even without a load. In retrospect it probably wasn’t the best choice of trailer for the job and now I tend to go for trailers with plastic body only to make the conversions easier.

At the time I was building this model I had just dismantled a DVD player for electronics, motors, gear etc. The disk tray from the DVD player had a motor with a gear box ending in a rack gear. I was surprised to find that this simple mechanism turned out to be pretty powerful so when I mounted it below the trailer it didn’t have too much trouble lifting the diecast trailer body.

There are a few problems to this design. The first is that the mechanism has no limit switches or possibly I had removed them so when the rack reached the end of its operating range the pinion gear jumped.This would eventually result in the gear wearing away so I added two limit switches one for the raised position and one for the lowered position. The second problem is that once the motor has raised the trailer bed and turns off there is nothing to keep the bed raised so it usually just slides back down.

A final issue with this design is that the DVD mechanism took up a lot of space which meant there was no room left for a battery.

I think I will upgrade this model to use an N20 motor with a screw drive to raise the trailer but it would need to be a strong one to lift the diecast trailer. This would also allow me to add a battery as the N20 motor would require much less space than the DVD drive.

Electronics in the Marston Trailer

There isn’t many videos of the Marston Grain Trailer on the RC Tractor Guy channel because it was built before the channel really took off and it’s not the best build but I might upgrade it in the future.