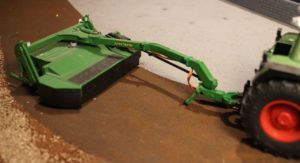 The idea behind this mower conditioner was to create a battery pack which would also have LED lighting and steering to give a new challenge to driving the RC Vehicles. The model is a 1:32 scale Britain’s John Deere Mower Conditioner (Britain’s 42118). I chose the model simply because it has a large area perfect for hiding larger batteries and also has a steering action which could easily be controlled using a servo.

I have changed the design of this model a few times as I have developed my tractor designs. The first design had a 7.4 volt battery voltage regulating circuits to drop the voltage to 5 volts as that is what I had used in my tractors and what the steering servo required. I had provided a servo signal wire from the original tractor designs to control models like this but I’ve since decided a servo output is pointless, it is better to add a mcu in the attachment rather than limiting yourself to one servo.

After I finished the John Deere 8360RT I needed an extra battery pack for the Monaghan Toy show in 2014 so I removed those electronics and added sockets for three AAA batteries in series because I could just buy a box of those batteries to get me through the show. Now I’m changing all my models to 3.7 V LiPo batteries and this model will be the same.

Adding steering to this model was extremely easy, it was simply a case of drilling a hole through the top of the mower, mounting a servo inside and adding a connecting rod from the servo arm to the towing arm of the mower.

My plan is to mount an Arduino Pro Mini inside the mower and have it control LED tail/brake lights and indicators as well as a warning beacon on the outside edge of the mower. The Arduino will also control the servo to steer the mower and I’m considering adding servos to raise and lower the mower too although this isn’t as straight forward as it sounds.

The Arduino will receive commands from the UART signal output which I have added to all my radio controlled tractors, exactly the same as my trailers. That’s all there is to this build, it is pretty simple but it is a very satisfying addition to your RC tractor fleet.