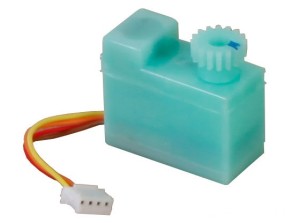 One of the biggest mysteries in the RC tractor world for a long times has been “How do I control a 4 Wire Siku Control 32 Servo?”. I wondered this for a long times and IÂ had a few ideas, I taught theÂ four wires might be ground, positive, a data signal and a clock signal. Another idea was that two wires were going to the motor and two wires were going to a potentiometer. The idea being that the Siku control board measured the position using the potentiometer and used a motor driver on the control board to move the servo motor.

After many hours staring at the oscilloscope and trying various Arduino logic analyzer sketches I eventually discovered I was completely wrong with my theories. On the plus side I did figure out what the four wires are, how to control the servo and I even made an Arduino library to control the 4 wire Siku Control 32 servos.