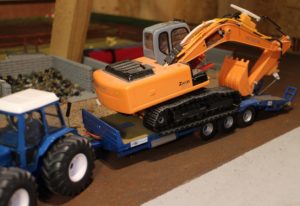 My first RC excavator was a 1:32 scale ROS Hitachi Zaxis 210 and the RC Hitachi was one of the most difficult builds I have done so far due to the many moving parts and the weights involved.

I wouldn’t advise you attempt this unless you were very confident and not too worried about breaking a few parts before you get it right. If you want to build an RC excavator I would suggest starting with a plastic New Ray New Holland E215B. I intend to get one at some point to see how easy that is, I suspect the plastic arm will be much easier due to the considerably lower weight.

That said, the ROS model has great detail so even if you just done the track control it would be a nice addition to your RC fleet.

By far and a long way the most difficult part of this build was the boom, more specifically lifting the boom. The entire model is diecast aluminium which makes the boom very heavy, add on that the extra weight of the servos and things get tricky. I cut holes in the arm using a dremel tool with cutting disks to mount the servo.

To open and close the bucket I used a Hobby King HK15178 servo because the arm is rather thin at this end and there didn’t seem much need for a heavy duty servo. This works pretty good, the result is smooth control of the bucket relatively easily.

To extend the arm I used a Hobby King HK15148B metal gear servo to give the arm some pulling power. There was more space in the larger section of the boom for this servo and again I got smooth control relatively easily.

I tried to use a HK15148B servo to lift the boom too however the control circuit repeatedly failed. I even upgraded the control board to that of a larger servo but that failed after an hour too. I suspect the current required to lift the arm was just too much. I finally got one to work but it’s not perfect.

I plan to replace the servo with an N20 drive motor which might be slow but should hopefully have enough torque to lift the boom.

To drive the tracks I used parts from old  Hobby King HK15178 servos which I had previously broken. I ended up with two servo cases with just the motors and gears with the hard stop removed. I took a servo arm and cut the arm off leaving just the round toothed part and then drilled out the gear on the model tracks to suit this part of the servo arm and glued it in. Then I just modified the frame to mount the two servos so that the gear was centred in the same place and put the tracks back on.

The track motors are driven by a L293D motor driver chip. This worked perfectly the control of the tracks couldn’t be better.

I used a Hobby King HK15148B metal gear servo for the slewing servo. I was going to try for continuous rotation using a 3.5 mm 4-pole audio jack to make the connection to the drive motors. However I decided to just settle for 180 degree rotation as there wasn’t really enough space to fit a motor around the audio jack and I just wanted to get the model finished after the boom raising servo had been so annoying.

The electronics are pretty much the same as my early tractors, I controlled everything with an Arduino Pro mini and the wireless communication was done with an XBee. I needed 6 volts for the motors doing the heavier work so I used a 3A UBEC (universal battery elimination circuit) to regulate the voltage. I only added six LEDs and so just needed one transistor to drive them. So electrically it was a simple build but mechanically lifting the boom is very difficult.

I need to upgrade this to the new system with the NRF24L01 radio module and I want to switch to an N20 motor to raise the boom so I will have quite a bit of work still to do.